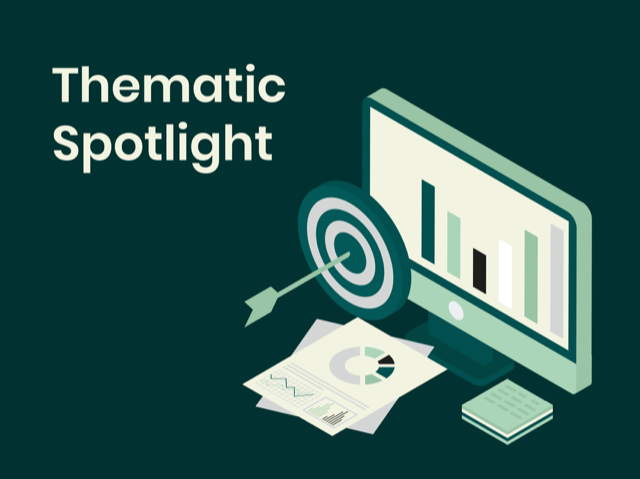 By Diego M. Franzin, Head of Portfolio Strategies of Plenisfer

The EU Carbon Credits (Emission Allowance Certificates EUA) today have all the credentials to establish themselves as a new asset class that is not only sustainable, but also capable of offering a portfolio which aims to achieve an efficient relationship between risks and returns, various advantages both in terms of contribution to performance and diversification. In particular, we see two distinct advantages for investors:

The price of Carbon Credits in recent days have reached a new historical record on the European market, exceeding a value of 49 euros. This growth trend has been going on for months and has seen every “emission allowance” – which can be purchased by companies to offset 1 ton of CO2 emitted – more than double in value compared to last year. 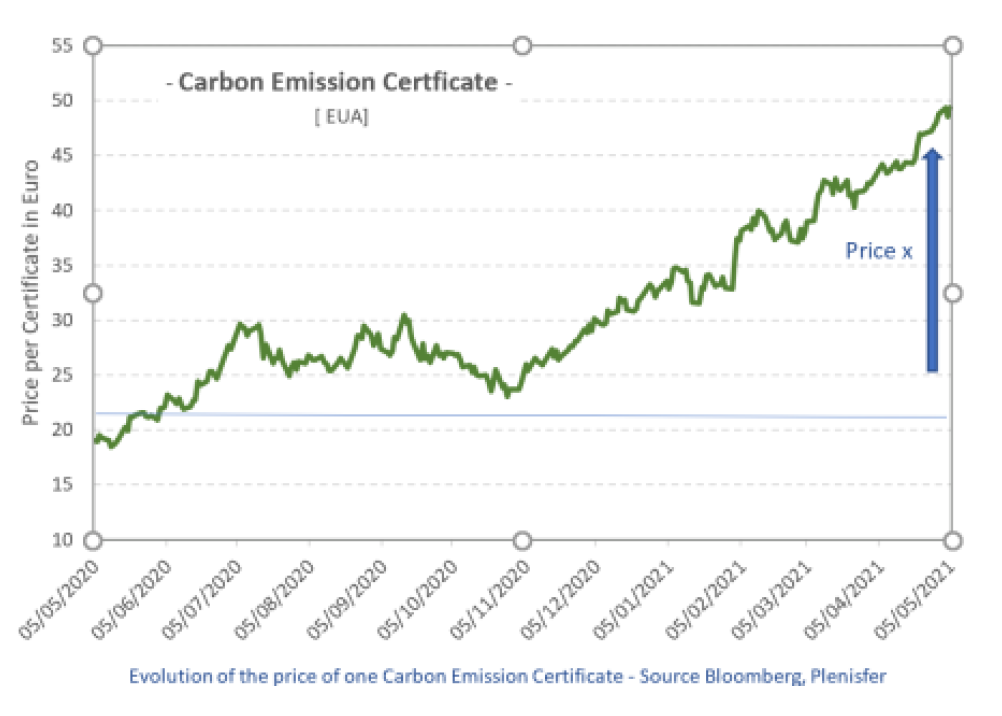 At Plenisfer, we believe that this growth trend will continue and that the value of Carbon Credits could more than double by 2030 with a prospective return of 7%-8% CAGR (“Compound Annual Growth Rate”). According to current estimates by the International Monetary Fund (IMF), the price per certificate could rise to 75 euros by 2030 to meet, by that date, the emission reduction objectives implicit in the commitments made under the “Paris Agreement (COP 21 – 2015). These commitments are based on a maximum level of global warming of less than 2 degrees Celsius, or rather, imply a reduction of emissions in Europe by 43% compared to 1990 levels. In our opinion, the current estimate of the increase in the value of Carbon Credits can easily prove to be conservative especially in light of: 1] Renewed and more ambitious objectives of the EU in terms of reduction of emissions, which have moved from -43% to -55% by 2030. Greater ambition seems to be necessary to reach the 2030 goals. 2] An enlargement of the scope of application of the certificate market. These and other considerations lead us to expect a certificate price substantially higher than that projected by the IMF which could reach 100 euros per certificate by 2030.

Although the value of the certificates is naturally linked to the trend of the economic cycle and innovation (in terms of efficiency of production processes aimed at reducing emissions), their price has limited correlation with other asset classes such as equities. and bonds. To date, the correlation has been in range below 0.4 both in “normal” periods and in periods of “stress” with traditional asset classes. 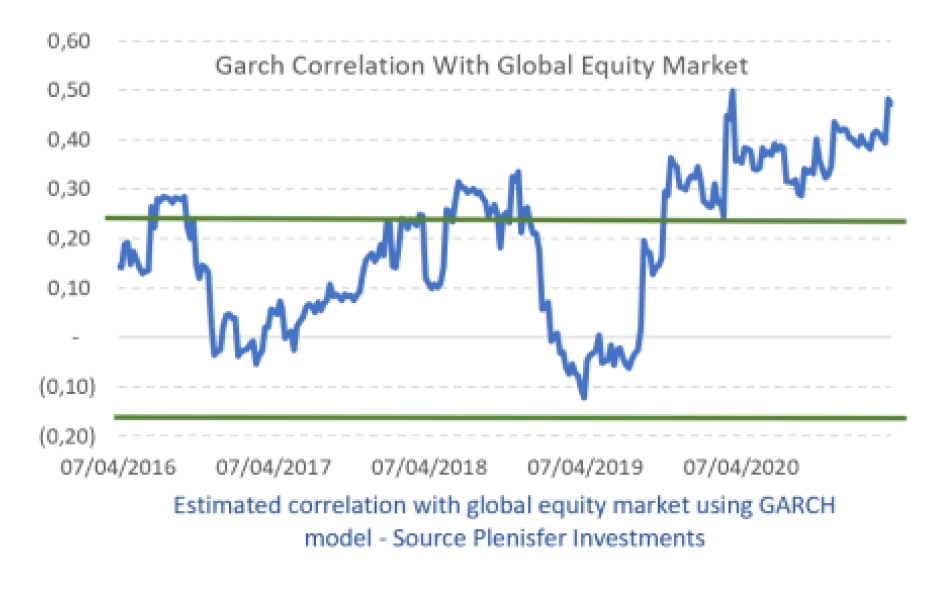 The Certificates market has existed for more than 15 years and has seen several evolutions, from the first phase (2005/08) in which the concept was introduced, to the current one (phase 4) which will take us up to 2030 and which is expected to see a more evolved and mature market; one which is more commonly accepted both from an economic and a political point of view. In this fourth phase we expect a substantial reduction in the volatility of the price of the certificates which was very high in the first phase (STDEV 45%, almost three times that of the global stock market). Finally, it is important to consider that until a few months ago it was either impossible or very complex to invest in this asset class. Today instruments have been made available on the market that allow sophisticated and non-sophisticated investors to take a position. This should have the effect of making the market more liquid and stable over time.

be purchased in issuance of the European Community, on the secondary market (ETS) in the form of a certificate, or the futures market as instruments that provide for the physical delivery of the asset upon maturity. There are multiple ETSs and regional schemes in the world, but the EU ETS is the most evolved, mature and liquid market by far; according to some estimates, trading volumes will grow from the current $3 billion a day to $5-10 billion in a decade. Some degree of global harmonization of these markets is expected in the future and the EU ETS is likely to be taken as an example as a best standard and point of convergence. The Carbon Credits Certificates market was created by the European Community to cover 3 emissions-intensive industries: energy production, manufacturing and domestic aviation, for a total of almost 10,000 plants which are estimated to represent 40/45% of the total emissions of the EU. Every year, the companies covered by the regulation must declare the amount of Co2 (or equivalent) produced and, to cover these emissions, they must deliver to the authorities an equivalent amount of certificates which are then canceled. To meet the need of companies to procure any missing credits at maturity, the secondary market and futures contracts on certificates were born. Carbon Credits are regulated by a Cap & Trade system, where Cap means the maximum number of certificates issued by the EU Exchange Trading System (ETS) each year. The number of certificates is constantly decreasing and will continue to decline, since the goal for which they were created is to encourage companies to pollute less. A push that brings companies to make production processes more efficient and progressively reduce emissions with a consequent lower need for certificates. The constant reduction of the Cap is very important as it exerts constant pressure on the price of certificates and represents the economic way in which the authorities encourage the energy efficiency of companies and therefore a transition to a sustainable economy. The system has in fact produced positive effects: emissions from plants covered by the ETS decreased by more than 9% in 2019 compared to 2018 (the largest decrease recorded in the last decade) and by about 35% compared to 2005. It is estimated that in 2030, will be reduced by 43% compared to 2005 levels.

The European Carbon Certificates market was born more than 15 years ago and has gone through various phases of evolution. From the beginning, 4 distinct phases of market evolution were envisaged. The first, from 2005 until 2007, was the phase in which the framework was introduced and most of the certificates were awarded free of charge. The introduction of this new mechanism met with various political resistances and learning from the mistakes made, both in the definition of the maximum amount of available certificates and in the allocation phase. The payment of the certificates was gradually introduced in the next two phases and the market evolved with mechanisms – such as MSR (Market Stability Reserve) – for offsetting supply and demand. The third phase which started in 2012, was that of the running of the system, in which we witnessed the birth of a market characterized by high volatility of the instruments, mainly due to the uncertainty of long-term political orientations in the environmental field. With 2020 we have entered the 4th and last phase that will take us up to 2030. 2030 remains a significant date in the carbon market as a reference point for all the objectives and ambitions of reducing emissions agreed during COP21 (Conference of Parties, Paris 2015), commonly known as the Paris Agreement. The Paris Agreement is an international treaty with legal validity signed in 2015 by 196 nations that have committed themselves to limit global warming below 2 degrees Celsius compared to the pre-industrial era. The fourth phase is the one in which the carbon market is ‘maturing’ and has opened up to financial investors, professional and non-professional, and to UCITS funds. In fact, ETCs (exchange trade commodities), an “ETFs” for this type of asset, were born. ETCs can be purchased not only by companies, but also by all investors, including retail, on various platforms.

New emissions targets: what impact on the value of Carbon Credits?

The objective of reducing emissions by 43% by 2030, with a decrease of 1.7% per year of the CAP, was set as a consequence of the Paris agreement. An objective now considered insufficient: on 21 April, the EU formalized a new agreement on climate neutrality which raised the bar of expected reductions: by 2030, emissions will have to be reduced by 55% compared to 1990 levels and reach net zero by 2050. According to the new targets, the annual rate of decrease in emissions will have to go from the current 1.7% to 2.2%. It is important to emphasize that the new European legislation will automatically enter into force in the countries of the Union, without needing to be implemented by national parliaments. 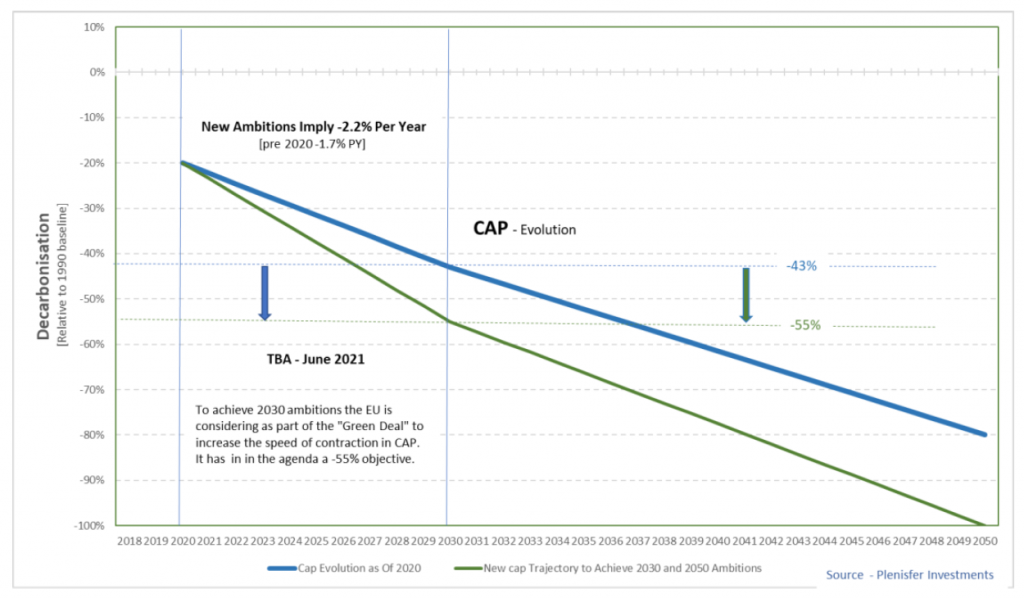 As a direct consequence, there will therefore be an acceleration in the rate of reduction in the number of certificates made available with consequent upward pressure on their prices. Suffice to say that while the number of certificates auctioned in 2019 decreased by 36%, auction revenues increased by 447 million euros compared to 2018, also due to the increase in coal prices. 2021 is an important deadline for the agreements and commitments made by the almost 200 nations present at COP21 (21st Conference of the Parties on United Nations climate change, from which the Paris Agreement was born): in November COP26 will be held in Glasgow, six years after the previous one. In line with the commitments made in 2015 in Paris, nations will have to deliver action plans to reduce global warming on the occasion of this new event. The growing attention to environmental issues and the wait for COP26 have supported the rise in certificate prices in recent quarters and will probably continue to do so.

According to the main IMF estimates, the value of the certificates may go from the current 47 euros to at least 75 euros by 2030, but we believe that these estimates do not reflect the various factors set out here that could lead to substantially higher prices that could reach 100 euros. per certificate by 2030. In particular, the commitment to environmental sustainability is now more defined than ever and the political agendas have moved accordingly, as demonstrated in Europe by the NextGenerationEU and, in the US, by President Biden’s fiscal stimulus plan. Furthermore, the ETS market has now entered a new phase, mature and open to investors, and characterized by less volatility than in the past. In Plenisfer’s view, the higher expected return, decreasing volatility and low correlation of an instrument traded in a market that has entered a phase of “maturity”, make Carbon Credits Certificates a tool to look at carefully, albeit in the light of some risk considerations. In the overall assessment of the tool, Carbon Credits remain highly dependent on political agendas and energy efficiency processes: in the event of a strong acceleration in this area, the need for companies to purchase Carbon Credits would decrease faster than expected. Finally, the opening of the market to investors could lead to an increase in the correlation of Carbon Credits with Equity and volatility could start to rise again.