Industrial Commodities Moment of Truth: Is this the peak of a mini-cycle or still the beginning of a supercycle?

Industrial metals have seen strong gains over the last nine months leaving investors wondering whether we are at the start of the next ‘super-cycle’ or is the fiscal-led rebound which began in 2020 getting close to its peak? In our view, the macro and fundamental backdrop for Industrial Commodities remain robust and we expect prices may experience further growth over the next couple of years. The real challenge will be to understand which commodities have long-term potential versus which have just benefited from an imbalance in demand versus supply but lack the capacity for structural growth. Plenisfer’s stance that certain commodities will continue to be supported by robust backdrop and are at the beginning of a new super-cycle, is predicated on a number of factors:

1. Sustained demand growth in China, as shown by the recovery in Chinese demand indicators, and vaccine-led recovery in the rest of the world.

China accounts for >50% of demand for key industrial commodities and remains the dominant driver of underlying commodity demand. The 3key segments of demand are: 1) property/construction 2) infrastructure and 3) manufacturing 4) auto. Although consensus expectations see some moderation in Chinese economic growth in H2 2021, real GDP is still expected to be in the region of 7.5-8% in 2021 and 5% in 2022. In addition, 2021 will also be the first of China’s 14th Five-year-plan and detailed reform plans will be announced this year, which, in our view, should bode well for commodity demand. Any normalisation in China of growth should also be compensated, to some degree, by vaccine-led recovery in the rest of the world.

2. Limited Supply Growth in Base Metals in Next Few Years

Mining Capex (Capital expenditure) reached an all-time high following the China-driven commodity super-cycle that began in 2003-04 with commodity prices mostly peaking in 2011 and capex peaking in 2012. During that super-cycle, mining companies increased their long-term commodity price assumptions based on a view that urbanisation and industrial development of emerging economies could last many years. In this scenario, projects that had previously been deemed ‘uneconomic’ ultimately became compelling. However, this investment in new capacity led to an increase in supply that drove commodity prices lower, leading to a cyclical downturn in the sector from 2012-15. The perception about investment in growth in mining has dramatically changed following the 2015-16 downturn. Balance sheets have become sacred, and capital returns have become more important than growth. Capital 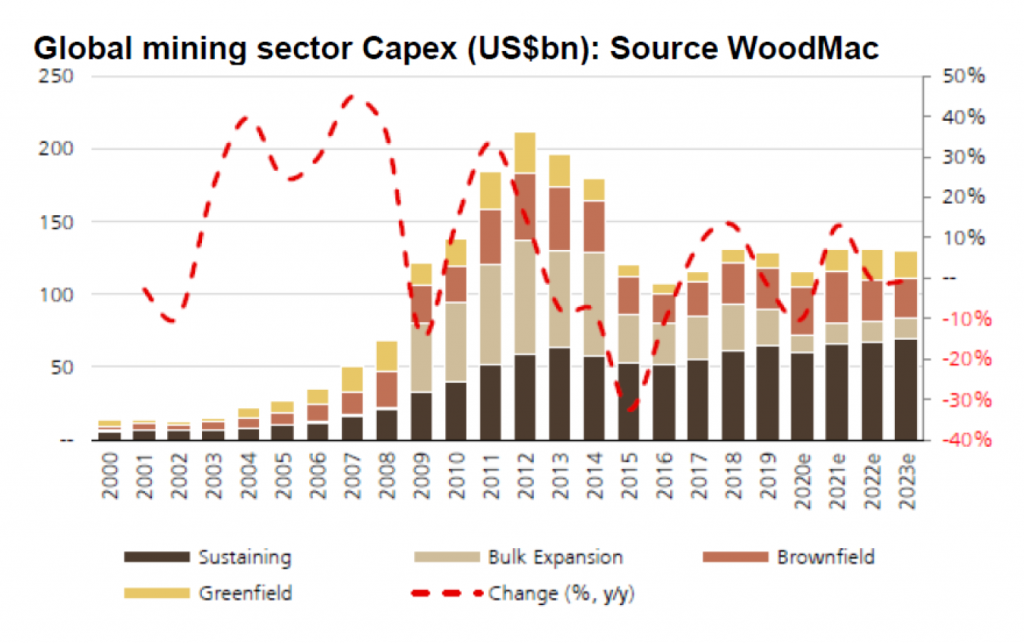 Capital intensity for mines has tripled over the last 40 years in real terms while maintenance capex has more than doubled from 2004 to today. Additional structural factors, such as increasing investor focus, are additional considerations and costs for companies in any development project. All of this suggests to us that further investment in growth is unlikely in the near term and thus supply growth will be limited which should support prices.

4. Will energy transition be the driver of the next super cycle replacing China?

Over the long term, we see policy support driving a structural shift towards renewable energy and electric vehicles. According to Wood McKenzie, the metals directly exposed to the EV batteries including copper, lithium and rare earths are likely to experience transformational demand growth that will lead to further price upside and/or an extended period of elevated prices. Decarbonising electricity, industry and transport will require a broad set of commodities, and copper could end up being the main beneficiary. Both Europe and the US are implementing metals-intensive stimulus plans to boost demand, alongside rebounding China demand leading to potential supply issues. 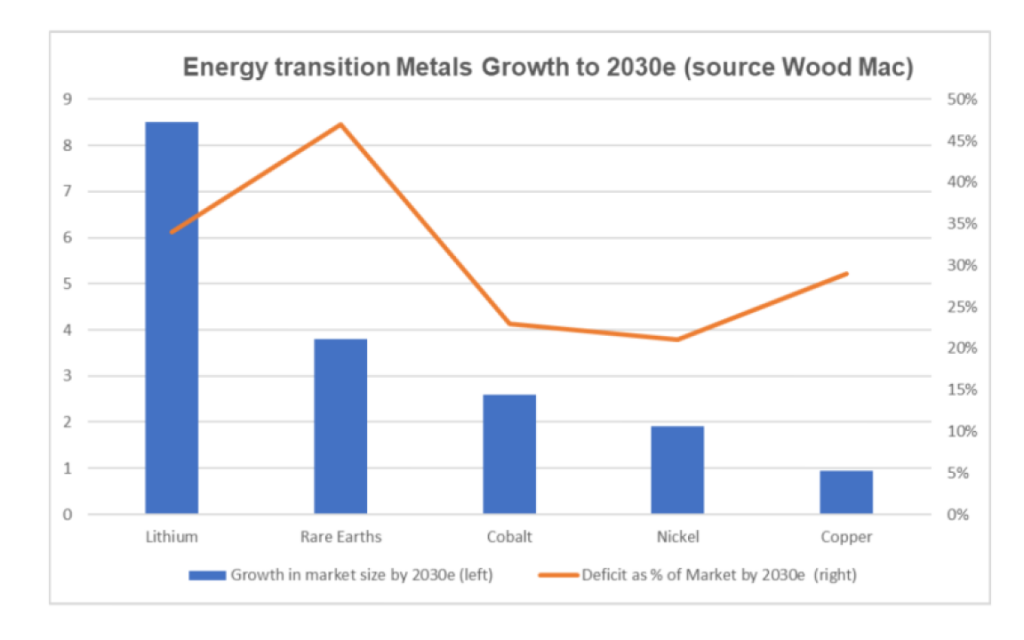 Given this backdrop, we prefer exposure to metals important for future technologies, namely copper, battery metals and platinum:

We see copper as best positioned to benefit from economic policy support across China, Europe and the US. Wood McKenzie estimates up to 3MNT of incremental copper demand from global offshore wind installations, and 5MNT from solar installations by 2030 and lastly the potential for 2.3MNT for Electric Vehicles. Copper is one of the few commodities where there is a general geological scarcity. 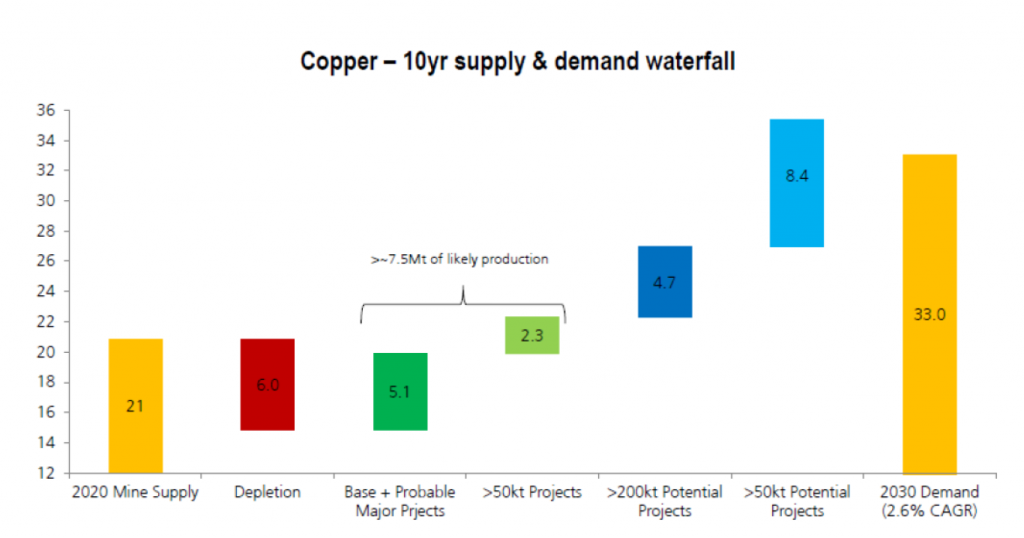 The chart above shows projection for mine supply compared to demand assuming just 2.6% CAGR by 2030 in line with the last 30 years average. It is unrealistic to expect these projects to all be built and run on time. Additionally, Wood McKenzie projects that electrification could accelerate demand to 3.5% or 4% CAGR by 2030. Taking both of these points into account, it is clear electrification could lead to material copper deficit resulting in a significantly higher price. 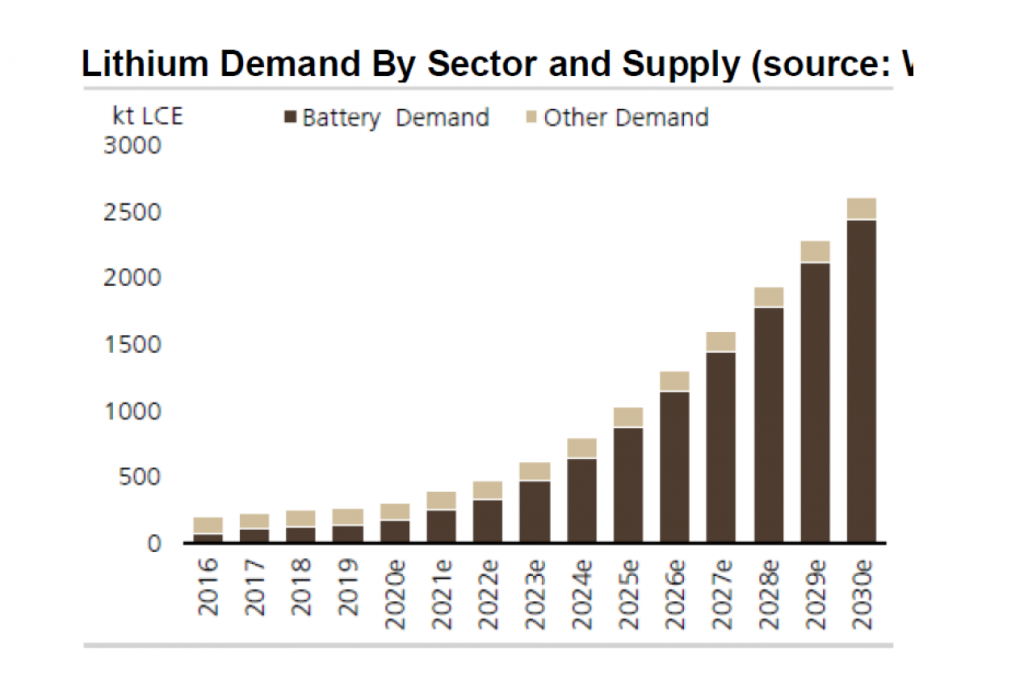 Lithium is a pre-requisite for all current and emerging battery technologies thus Electric
Vehicle demand is not at risk from how the cathode innovation evolves. This contrasts with
cobalt which battery makers are trying to shift away from. In the medium to long term, we think supply will be challenged to keep up with the steep incline in demand driven by aggressive Electric Vehicle growth.

There are 17 chemical elements collectively known as Rare Earths. Of these, 2 elements in particular, Neodymium (Nd) and Praseodymium (Pr) face a step change in demand from Electric Vehicle sales. Permanent magnets are the largest end use market for Rare Earths and are used in consumer electronics, auto accessories and air conditioning. They are also increasingly being used in larger applications such as Electric Vehicle drive trains and wind turbine generators. High performance magnets play a key role in electric traction motors. Estimates vary, but existing internal combustion vehicles use between 0.2 -0.7kg of NdPr per vehicle, while Electric Vehicles can use between 1-2kg.
We expect this to drive significant demand growth over the next decade. 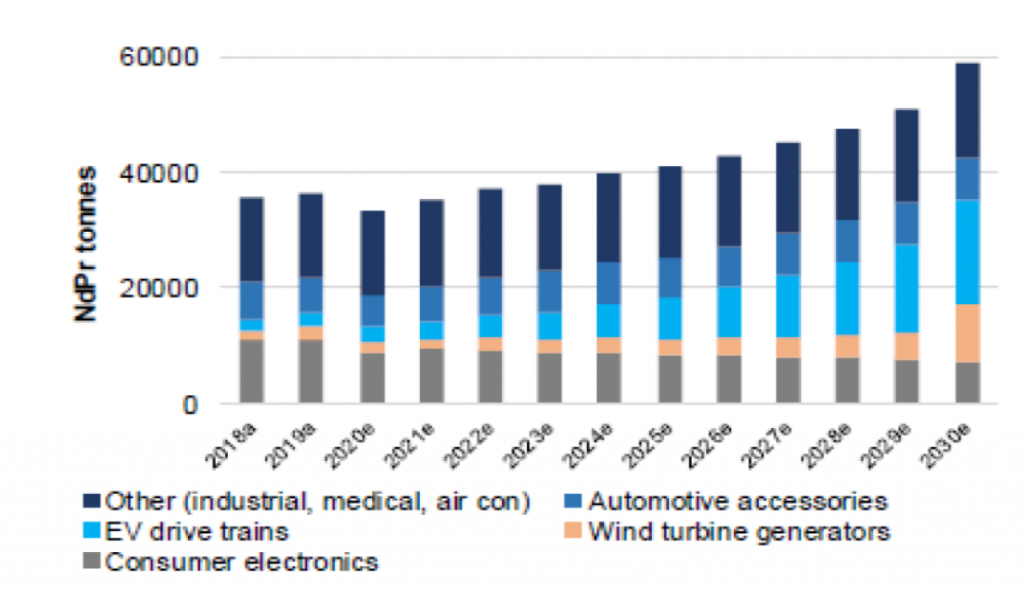 We anticipate a supply gap may emerge from 2023 on a post COVID19 recovery in the auto/EV markets.

The Platinum market currently sits in a modest surplus, and over the near term, palladium for platinum substitution in conventional ICE autocatalysts applications likely holds the key to a supply-demand improvement. Indeed, car makers are looking closely at potential opportunities to substitute some palladium with platinum without compromising their ability to meet current or future emissions limits as Palladium price increased 5x vs Platinum over the last 5 years. The combination of improving volumes and higher loadings per vehicle as a result of tightening emission standards is expected to result in double digit demand growth in 2021-22.

Over the medium term, Platinum’s role in the Hydrogen economy is crucial. It is used in fuel cells and in the electrolysis of water using renewable energy to produce green hydrogen, where it is used in conjunction with iridium as a catalyst during electrolysis. The current EU and China green hydrogen generation capacity targets alone would require, cumulatively, over 1m oz of Platinum by 2030 about 18% of current mining supply. Over the long term, the establishment of base demand from the hydrogen economy could lead to material appreciation of Platinum price taking also into account supply constraints and long lead time to build new production.

Basic Resources Sector Still Materially Undervalued:
In conclusion, while the sector is up 100% from its March 2020 lows and at its highest point since 2011, we believe there is further room to re-rate, given the supportive macro backdrop. Risks, of course, remain. If China’s economy slows materially or vaccine rollout is disrupted and delays recovery in the rest of the world, this will impact the sector in the short term at least. Changes to taxation on the mining industry could also impact projections. However, we believe that structural trends such as electrification support the medium to long term view that we remain at the beginning of a super cycle in certain commodities and commodity-related investments. Active management and depth of fundamental analysis will be required to discern which will be the long-term winners in the space.r...